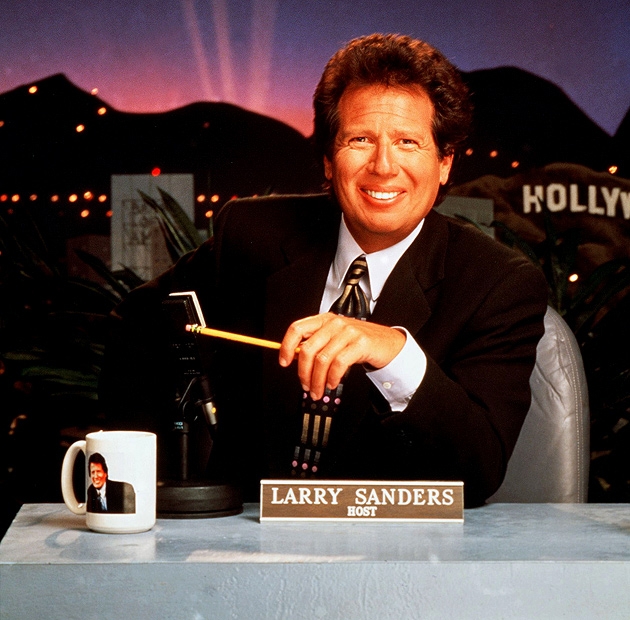 Between It’s Garry Shandling’s Show and the masterpiece that followed, HBO’s mock-talk show The Larry Sanders Show, Garry Shandling was responsible for some of the most inventive and influential TV of the 1980’s and ’90’s. These two shows were instrumental in changing pay-cable’s image from a purveyor of uncut feature films to a source of original programming that colored outside the lines of broadcast TV.

Even if you’ve never seen either show, you’ve seen their influence. Following a couple of years in the wake of It’s Garry Shandling’s Show, Seinfeld had a similar neurotic-comedian-playing-himself premise and subversive/quirky comic tone (writers Tom Gammill and Max Pross got their start on It’s Garry Shandling’s Show). Larry David’s later Curb Your Enthusiasm, with its star and celebrity guests playing versions of themselves, hearkens back to both of Shandling’s shows. And Ricky Gervais’s The Office worked both the broken fourth wall angle of It’s Garry Shandling’s Show and the uncomfortably awkward emotional tone of Larry Sanders. Among the now-familiar writers and actors who came to prominence working on Shandling’s series are Judd Apatow, Jeffrey Tambor, Bob Odenkirk, Mary Lynn Rajskub and Jeremy Piven. Shandling’s two shows jump-started what we now know as the modern TV comedy sensibility — self-reflexive, not afraid to make viewers squirm, with the punchlines unpredictable if there at all.

In a column written for Salon at the end of 1999, I listed The Larry Sanders Show as one of the decade’s most groundbreaking TV shows; it further blurred the boundaries between TV and reality and commented on the pervasiveness of TV in our culture and emotional lives. Shandling’s Larry Sanders was an insecure, egotistical, paranoid late-night talk show host, aloof as Johnny Carson (for whom Shandling often subbed in real life as host of  The Tonight Show), self-loathing as David Letterman and viciously competitive as Jay Leno. Forget psychodrama, I wrote, this was psychocomedy: “Life was a talk show for the emotionally frozen Larry, who couldn’t relate to other humans without a camera running; his producer and father figure Artie (Rip Torn, in one of the most brilliant performances of the decade) called him ‘half-man, half-desk’.”

The Larry Sanders Show was a pitch-dark comedy about Hollywood at its ugliest, where ratings equalled love and everything in Larry’s world came down to maintaining his perch at the top of the celebrity food chain. In the jerk behavior of guests playing themselves on the talk-show-within-a-talk show (Roseanne Barr, Alec Baldwin, Robin Williams, Jon Stewart and David Duchovny are a few of  those who appeared) and in the brutal carelessness with which passive-aggressive Larry treated his sad-sack on-air sidekick Hank Kingsley (an unforgettable Tambor), Larry Sanders anticipated the train wreck appeal of reality TV. And Shandling’s layered performance as a complicated monster who you can’t help cutting slack might have helped ease viewers into the mindset needed to appreciate Tony Soprano when HBO unveiled The Sopranos a year after Larry Sanders‘ final episode.

Even Larry’s talk-show catch phrase — “No flipping,” said directly to the camera while miming a TV remote as the feed cuts to a commercial — commented on the enormous changes TV was undergoing in the ’90s. Before cable and remotes, there weren’t enough channels to even make it worth flipping.

As I wrote in a Salon column about the end of Larry Sanders, “Some of the show’s funniest and sharpest moments — and some of its saddest and most intimate — came when Larry watched himself on the tube. Nothing else turned him on this way; he was enthralled with, in love with, his TV self. Five hours a week he was Larry Sanders; the rest  of the time, he was bored with himself for being human. The paradox of Larry Sanders is this: A show about people too damn famous to have feelings was the one comedy on TV that could make you cry.”

In real life, Shandling was more introspective (he practiced Buddhism for much of his life) than his TV alter ego. After Larry Sanders ended, Shandling kept a low profile, appearing in the occasional movie (Iron Man 2, Dr. Dolittle). He was a recent guest on close friend Jerry Seinfeld’s Comedians in Cars Getting Coffee; ironically, the episode is titled “It’s Great that Garry Shandling Is Still Alive.” His death from a suspected heart attack Thursday at age 66 stunned his fellow comedians, friends and fans. If you care at all about TV’s history, do whatever you can to see full episodes of Shandling’s two series, and give a pioneer his due.

This site uses Akismet to reduce spam. Learn how your comment data is processed.

Visit my archive of work from print and online media.

From Points in Case (9/7/19): I’m the Fun Mom on This Migraine Commercial and I’m Begging You, Please Kill Me

From The Belladonna (4/10/19): I’m the Merciless Mirror in the Fitting Room of Macy’s and I Will Crush Your Soul

From Points in Case (2/18/19): Major Strasser of the Third Reich Trashes Rick’s Cafe on Yelp

From Robot Butt (1/30/19): An Oral History of John and Yoko’s Bed-Ins for Peace by 11-Year-Old Me, My Friend Karen Finkelstein and Her Stupid Brother Jay

From Points in Case (10/15/18): Me, Frankenstein Monster, Am Victim of Angry Mob and Me Blame Soros

From The Belladonna (4/22/18): Donald Trump Is Pleased to Announce the Very First Pollution Day! (Formerly Known As Earth Day)

From The Belladonna (12/19/17): Other Words the Trump Administration Wants to Ban the CDC from Using

From The Belladonna (10/31/17): Schedule of Events for the White House Halloween Celebration

From Robot Butt (9/27/17): As a Mother and Charmin Bear, I’m Resisting the Country Bears’ Agenda of Hate

From The Belladonna (7/17/17): Daily Itinerary: How Rep. Maxine Waters Stays in Fighting Form

From McSweeney’s (5/19/17): Dream Vacations for People Who Can’t Take Another Day of this Trump Nightmare

From The Village Voice (3/21/17): The Brontes Rise Brilliantly Above Their Station in a Rousing ‘Masterpiece’

From The Belladonna (3/6/17): March Your Way to Incredible Wealth As a Liberal Paid Protester!

From Bullshitist (1/7/17):Order of Program for the Inauguration of President Donald J. Trump

From The Village Voice (8/23/16):Norway and Netflix Invite You to Binge on Knitting and Woodcutting

From McSweeney’s (9/18/15): Finally, an HMO that Fits Your Lifestyle, Budget and Deep-Rooted Mistrust of Doctors

From McSweeney’s (7/24/15): Workplace Features of a Super-Fun Tech Start-Up and Also Pee-wee’s Playhouse

From McSweeney’s (3/6/15): A Field Guide to Women of North America According to the Lyrics of Rock Songs Written by Men